Last week I woke up with a slight fever and a sore throat. Found this at the vitamin shoppe: 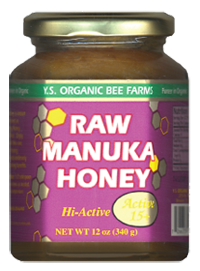 Manuka honey is found in Australia and New Zealand and is considered one of the strongest in terms of antibiotic activity.
It soothed my sore throat immediately but I still felt it every few hours and would take a little more.
I thought I would have to make a trip to the doctor for some antibiotic or to make sure I didn’t have something like strep.
After about 2 days of this treatment the sore throat was gone! Just luck? Not sure, but I’ll definitely try it again at the first sign of a sore throat.
I recently bought some raw Buckwheat honey because it was shown to increase antioxidant activity in the body. You can find the study here.
Here’s the abstract:
“Honey has been known to exert significant in vitro antioxidant activity, in part due to its phenolic content. However, conclusions that the antioxidants in honey are or are not efficacious in the human body cannot be reached if its antioxidant action is not assessed as part of a human study. In the present study, the acute effect of consumption of 500 mL of water, water with buckwheat honey, black tea, black tea with sugar, or black tea with buckwheat honey on serum oxidative reactions was examined in 25 healthy men. Antioxidant capacity of human serum samples was measured using different methods: the oxygen radical absorbance capacity (ORAC) assay, ex vivo susceptibility of serum lipoprotein to Cu(2+)-induced oxidation, and the thiobarbituric acid reactive substances (TBARS) assay. The results showed that the serum antioxidant capacity determined by ORAC increased significantly (p < 0.05) by 7% following consumption of buckwheat honey in water. No significant changes in serum antioxidant capacity could be established after the consumption of any of the other beverages. Ex vivo serum lipoprotein oxidation and TBARS values were not significantly altered after consumption of any of the five beverages. This study provides primary evidence of the in vivo antioxidant activity of buckwheat honey. However, long-term studies and epidemiological data are necessary to investigate whether honey consumption can exert overall antioxidant-related health benefits."